What is a nonneutral plasma? A nonneutral plasma is a collection of charges whose net charge creates an electric field large enough to play an important or even dominant role in the system dynamics. Nonneutral plasmas consisting of a single species have been created in laboratory experiments, including pure electron plasmas, pure ion plasmas, positron plasmas, and antiproton plasmas. To learn more you may also want to visit the web page of our non neutral plasma group, and of the Surko group.

Why study nonneutral plasmas? Nonneutral plasmas provide many exciting research opportunities that are difficult or impossible to achieve in other plasma systems. For example, these plasmas can be confined for long periods of time (days) using only static electric and magnetic fields (see below). The plasmas can be very quiescent and reproducible and this allows highly accurate comparisons of theory to experiment. Recent examples are the accurate determination of cross-magnetic field collisional transport coefficients (thermal conductivity, diffusion and viscosity). Also, nonneutral plasmas can be cooled to very low temperatures with no recombination, allowing them to access novel strongly correlated states. As a consequence, these plasmas are arguably the best understood confined plasmas anywhere (not that there aren't many open questions! Have a look at our main web page for some recent work.)

2D Fluid dynamics Nonneutral plasmas also can be confined in a regime where they behave the same as an inviscid incompressible 2-dimensional fluid (an 'Euler fluid'). In fact, our group has learned quite a bit about turbulence and nonlinear fluid processes in Euler fluids by studying nonneutral plasmas, both in experiments and numerical simulations. Some of this work is discussed here.

Confinement. Nonneutral plasmas can be confined for long periods of time using only static electric and magnetic fields. One such configuration is called a Penning Trap, after the inventor F. M. Penning. The trap consists of a several cylindrically symmetric electrodes and a uniform magnetic field applied along the axis of the trap (see diagram below).

Axial confinement (for a positive plasma) is provided by positive voltages applied to the end electrodes, which creates an axial potential well. Radial confinement is provided by the magnetic field. The plasma rotates, and the resulting v x B force is radially inward, balancing the outward electric force caused by the unneutralized collection of charges.

If the Penning trap had perfect cylindrical symmetry, the plasma would be confined forever. However, since there are always small irregularities in the trap fields that break the cylindrical symmetry, these irregularities drag on the plasma, slowing down its rotation and decreasing the confining v x B force. This results in a loss of the plasma, but these irregularities can be made so small that the plasma can be confined for days in actual experiments. In addition, a new technique (called the 'rotating wall') has recently been invented by our group; it allows us to spin up the plasma, keeping it spinning and confined in the trap for as long as we wish.

Coulomb Crystals. Nonneutral plasmas can be cooled to very low temperatures with no recombination, allowing them to access novel strongly correlated states. For example, pure ion plasmas have been cooled until they crystallize - forming a bcc crystal. The crystal structure can be observed in the Bragg-scattering image shown below. Laser light is passed through the crystal, and some of this light is diffracted by the crystal, forming a Laue dot pattern. Although the entire plasma is rotating, the Laue dots can be observed by strobing the detector electronics at the rotation frequency. 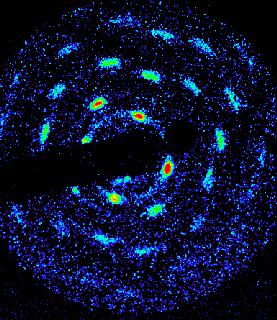 This image was created by the Bollinger-Wineland atomic physics group at NIST from a relatively large sample consisting of several hundred thousand ions.

Surface Effects When the number of ions in the sample is smaller, surface effects change the structure of the plasma. AS the number of ions is varied, or as the external fields are varied, structural phase transitions can occur. These have been studied both theoretically and experimentally. One example is a nearly 2D system of ions consisting of just a few lattice planes, confined in the axial direction by a quadratic electrostatic potential well. A single plane is predicted to form a triangular lattice, but as the number density increases, the ions eventually find it energetically favorable to come out of the plane, forming 3 triangular planes. Then at slightly higher density, the system reverts to 2 square lattice planes, and then undergoes a 2nd order transition to a rhombic structure. As the number density increases further, more planes appear until eventually the system is sufficiently thick that surface effects can be neglected and a bcc lattice forms in the bulk plasma (at about 60 lattice planes for a zero temperature plasma; fewer planes are required to reach the bulk bcc behavior at finite temperature).

Many of these predictions have been observed in recent experiments at NIST that directly image the crystal structure by causing the ions in the crystal to fluoresce in laser light. Again, the detector electronics are strobed at the crystal's rotation frequency so that individual ions can be resolved. Below are several images, taken at increasing values of the number of particles per unit area, showing several structural phases (T. B. Mitchell, J. J. Bollinger, D. H. E. Dubin, X.-P. Huang, W. M. Itano, R. H. Baughman, Science,282 1290 (1998)).

The distance between the ions in this image is a few microns. The temperature is a few millidegrees K.

Coulomb Clusters When the number of trapped charges is small, the crystals are referred to as 'Coulomb Clusters'. At zero temperature the clusters are a minimum energy state of N like charges, confined against their mutual Coulomb repulsion by the external applied fields of the trap. Some examples of these clusters are shown in the figure below (ions sit at the vertices of the figures). I have set up an interactive java routine to show how the cluster structure depends on the form of the external confining field. See cluster viewer.