In recent work*, my student David Schecter has completed a study of the motion of vortices that are inside a slowly varying background vorticity. Understanding this motion is important to help understand the path that hurricanes take as they move across the Earth's surface.

Our theory also predicts the speed at which the vortices move as they mix the background.

The following link is to is a movie of this vortex motion. (5MB animated gif) .

Here is an image from this movie, showing how 2 vortices , a clump and a hole , (the black and white spots) move in a background vorticity.

Note that the hole (the white spot) moves down the gradient much more slowly than the clump (the black spot) moves up the gradient. This difference in speeds is one of the main predictions of our theory.

Also, since clumps move to the peaks in the background vorticity, and holes move to the troughs, we predict that strong hurricanes should also approach these equilbrium positions when they are inside a varying background vorticity. A strongly-varying background vorticity can be found on the planet Jupiter, which exhibits strong equatorial winds that vary rapidly with latitude. Jupiter also has many strong hurricanes, such as the GREAT RED SPOT (GRS), which happens to be a clump. Other storms are holes. It has been previously observed that holes sit in vorticity depressions, and clumps sit at vorticity peaks, as can be seen in the following slide showing the positions of Jupiters long-lived storms . Our theory provides a possible explanation for why this happens.

Here is an example of some of our group's research in fluid dynamics. Below is a set of four experimental images, taken at increasing times from left to right. They show the time evolution of a nonneutral plasma towards a 'vortex crystal ' state, consisting of intense 2D vortices (clumps of electrons spinning rapidly) arranged in a lattice within a lower intensity background.

These vortex crystals appear spontaneously from certain turbulent initial conditions. My student Dehze Jin and I have worked out a statistical theory that predicts the structure of the vortex crystals*.

The following image displays experimental pictures of 4 vortex crystals in the top row. The bottom row displays the corresponding theory prediction for the crystal structure, based on maximizing a constrained entropy functional for the system. (D.-Z. Jin and D. H. E. Dubin, Phys Rev Lett. 80, 434 (1998)).

Recently similar vortex crystal states have been found to exist in the turbulent atmosphere of Jupiter, near both the north and south poles. 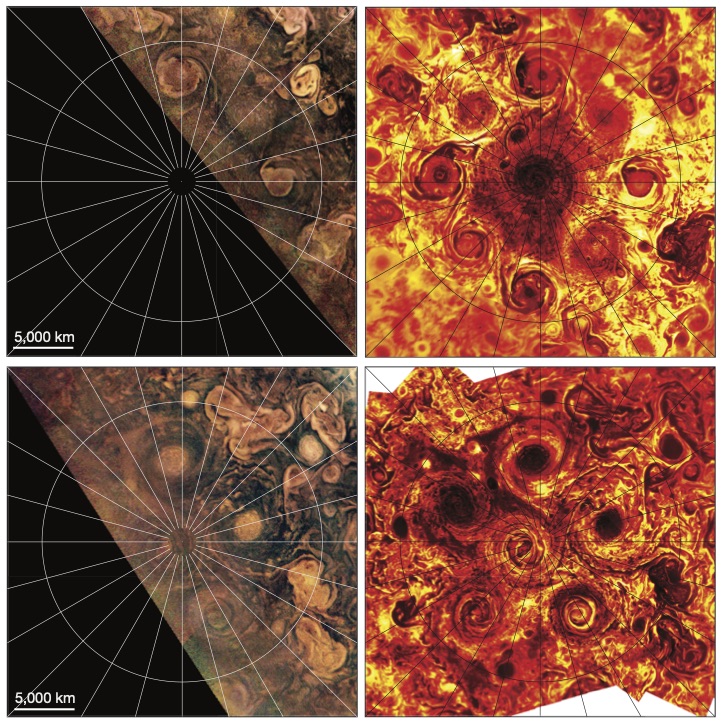 This figure, from A. Adrian et al, Nature 555, 216 (2018), shows images of the north (top) and south (bottom) poles of jupiter in the visible (left) and infrared(right). How these vortex crystal states come to exist and survive for long periods of time on Jupiter is a subject of current research.